If we have to do something, like a task given by our superior, there are essentially two methods we can follow to compelete it. First, we can work as hard as we can until it is “done”. Second, we can fix the amount of time we spare to that task and do the “best” we can. The latter method is known as “Time boxing“. 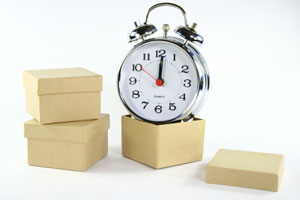 Timeboxing is a simple time management technique I use often. I first learned about it in software development terms. Let’s say you have a fixed deadline for a new product you need to release, such as an annual upgrade to software for calculating income taxes. You must have a new version ready by a certain date. So you’ll probably use timeboxing for your development cycle, meaning that you do the best job you can within the time available. What new features you can implement are totally determined by the time frame. Slipping the schedule is simply not an option, so if you get behind, you must cut features.

In terms of managing your own tasks, timeboxing can be a helpful technique. I primarily use it in two different ways.

First, let’s say you want to get something done, but there’s a risk it could end up taking far more time than it’s worth because it’s the kind of task where you might exhibit perfectionist tendencies. So you give yourself a specific amount of time, which you won’t go over, and you simply do the best job you can within that time.

As an example I use timeboxing when doing my new year shopping each year. I usually allocate a total of 2 hours to the task, which for me involves buying gifts for 8 people (my wife handles the rest). I decide in advance what kind of gift I should get each person on my list, and then I order as much as I can online and then head off to the local mall, where I zoom from one store to the next picking up gifts as I go. I also usually take advantage of my flexible schedule, doing the shopping on a weekday morning when the stores aren’t busy and I don’t have to wait in line. So I’m in and out with everyone’s gifts in under two hours.

(I know some people love holiday shopping, and taking multiple trips to browse is fine if it’s something you enjoy. But if you’re shopping-challenged like me, and you’re no more likely to get gifts that are any better if you invest an extra 10 hours in the task, then it may be best to simply resign yourself to doing the best job you can within the time you have available.)

The second way I use timeboxing is when I have a task or project that I wish to complete, but I don’t really know where to begin, or it seems like it’s going to be a long time before I can finish a meaningful chunk. Or maybe it’s something I find really tedious and would have a tendency to procrastinate on. Then I use timeboxing to simply commit to working on the task for a given period of time to make a dent in it. I normally use a period in the range of 30-120 minutes. I release any concern about reaching a particular milestone within that time — I simply commit to putting in the time, regardless of how far I get. An example where I use this approach would be when I’m writing a new article. Finishing a complete article will usually take me 3-8 hours. Sometimes I can complete an article in a single stretch, but most of the time I’ll stretch it over multiple sessions. So I use timeboxing to just put a dent in the article and get started, committing myself to writing for 1-2 hours without worrying about how far I get. Then I just repeat the process until the work is complete.

A side effect of this last method is that I’ll often end up working much longer than I originally intended. If I commit to working on a tedious task for just 30 minutes, it’s easy to get started because I’ve given myself permission to stop after only 30 minutes. But once I’ve overcome that inertia and am now focused on the task, 90 minutes may pass before I even feel the desire to stop.

Timeboxing’s ability to circumvent perfectionism and avoid procrastination makes it a useful time management technique. I even used it for this blog entry, and now that my wife has returned home with dinner and a movie rental, it’s time to say goodbye…

Don't Be Too Curious