Do you have the courage to live consciously?

In this article series, I am going to talk about the importance of “courage”. First of all, let me explain the meaning of  “courage” in our day-to-day lives. The virtue of courage doesn’t receive the attention it deserves. Courage is a quality reserved for soldiers, firefighters, and activists. Security is what matters most today. Perhaps you were taught to avoid being too bold or too brave. It’s too dangerous. Don’t take unnecessary risks. Don’t draw attention to yourself in public. Follow family traditions. Don’t talk to strangers. Keep an eye out for suspicious people. Stay safe. 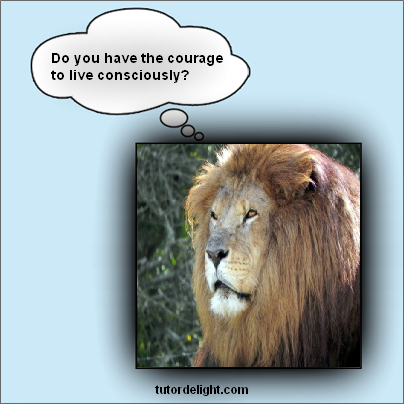 Security is mostly a superstition. It does not exist in nature,
nor do the children of men as a whole experience it.
Avoiding danger is no safer in the long run than outright exposure.
Life is either a daring adventure, or nothing.
To keep our faces toward change and behave like free spirits
in the presence of fate is strength undefeatable.
– Helen Keller

But a side effect of overemphasizing the importance of personal security in your life is that it can cause you to live reactively. Instead of setting your own goals, making plans to achieve them, and going after them with gusto, you play it safe. Keep working at the stable job, even though it doesn’t fulfill you. Remain in the unsatisfying relationship, even though you feel dead inside compared to the passion you once had. Who are you to think that you can buck the system? Accept your lot in life, and make the best of it. Go with the flow, and don’t rock the boat. Your only hope is that the currents of life will pull you in a favorable direction.

No doubt there exist real dangers in life you must avoid. But there’s a huge gulf between recklessness and courage. I’m not referring to the heroic courage required to risk your life to save someone from a burning building. By courage I mean the ability to face down those imaginary fears and reclaim the far more powerful life that you’ve denied yourself. Fear of failure. Fear of rejection. Fear of going broke. Fear of being alone. Fear of humiliation. Fear of public speaking. Fear of being ostracized by family and friends. Fear of physical discomfort. Fear of regret. Fear of success.

How many of these fears are holding you back? How would you live if you had no fear at all? You’d still have your intelligence and common sense to safely navigate around any real dangers, but without feeling the emotion of fear, would you be more willing to take risks, especially when the worst case wouldn’t actually hurt you at all? Would you speak up more often, talk to more strangers, ask for more sales, dive headlong into those ambitious projects you’ve been dreaming about? What if you even learned to enjoy the things you currently fear? What kind of difference would that make in your life?

Have you previously convinced yourself that you aren’t really afraid of anything… that there are always good and logical reasons why you don’t do certain things? It would be rude to introduce yourself to a stranger. You shouldn’t attempt public speaking because you don’t have anything to say. Asking for a raise would be improper because you’re supposed to wait until the next formal review. They’re just rationalizations though – think about how your life would change if you could confidently and courageously do these things with no fear at all.

Next articles of  “Courage” topic will be about:

How to Live Your Values – Part 4

How to Live Your Values – Part 3

How to Live Your Values - Part 2